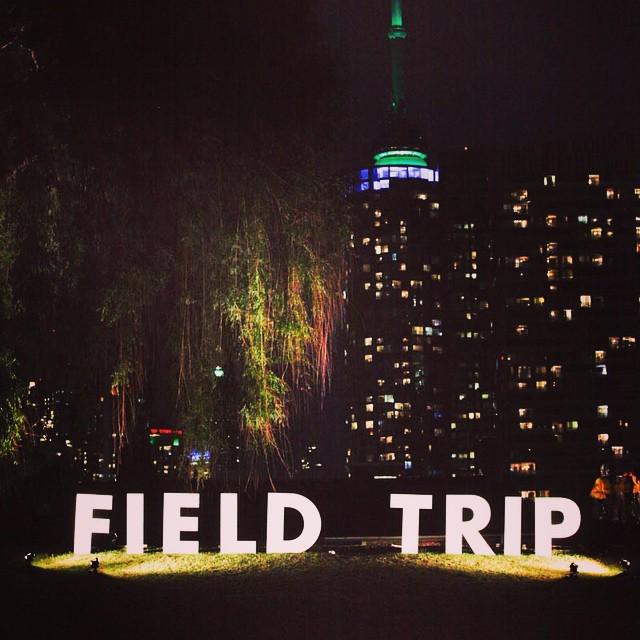 Held on the historic grounds of Toronto’s Fort York, the Field Trip Music & Arts Festival has steadily been growing since its inception in 2013. This was my first time attending, and I was impressed with how well-suited Fort York was for a mid-size festival. It felt like the grounds were fairly compact, yet there was absolutely no sound bleeding between the two stages. Also, the pathways were busy but didn’t bottleneck, which is a huge plus.

Here’s my recap of the music I checked out at the festival last weekend:

My first day at Field Trip got started with Apostle of Hustle over on the smaller Fort York stage. As somebody who tends to find a spot I like at the main stage and stay there for most of the day, it was nice to get a bit of the “side stage” experience, where things are usually a lot more laidback. Apostle of Hustle sounded fantastic, and though their crowd was small, the die-hards near the front were clearly thrilled to have the band back after their four-year absence. These guys did the most with fewest people on stage. (It’s hard to believe it when you hear them, but Apostle is a trio.)

Over on the main stage, The War on Drugs provided the perfect soundtrack for a lazy late afternoon. Playing tons of material off their excellent 2014 album, Lost in the Dream, The War on Drugs were cool and low-key compared to most of Field Trip’s acts. They sounded fantastic (and the sax player was a welcome touch) but their on-stage vibe felt a touch introverted for the festival setting. That said, “Red Eyes” got everybody bobbing along.

Certainly not short on energy were The Arkells, who tore through a set packed wall-to-wall with hits. Considering the Hamiltonians only released their first LP in 2008, they’ve put out a pretty impressive slew of infectious singles that have been inescapable on Canadian rock radio. Songs like “The Whistleblower”, “Kiss Cam”, and their newest, “Leather Jacket”, all sounded particularly great live, and the band had the enthusiasm to back up their sort of Springsteen-y, working man sound. Lead singer Max Kerman was all about audience interaction, too, getting people to dance, cheer, and sing along song after song.

The day had already been filled with great vocalists, but then Alabama Shakes came along to show everyone how it’s really done. Lead singer Brittany Howard is known for being a powerful live presence, and she certainly didn’t disappoint. The crowd was on board from the first note, and Brittany was in the zone. Highlights included “I’m Yours” from their moodier, slow-burning latest LP, Sound and Color, and the boppy, infectious “Hang Loose” from their debut.

Also, while I didn’t see much of Purity Ring’s set, it’s worth noting that when I walked by, they were battling some serious technical difficulties. It seems they frequently lost power during their set, which is a shame, because they had a pretty awesome light show going on. Nonetheless, the band seemed to be staying good-natured in spite of the problems.

Sunday offered up a little bit of everything, including some amazing food. Field Trip goes the food truck route and since I’m a naturally indecisive person, choosing between roughly 20 different vendors was a long process. I eventually landed on Fidelo Gastro’s, though, and their creation called the “Sgt. Slather” (a pulled pork sandwich topped with guacamole and tortilla chips) turned out to be a fantastic choice.

In terms of, y’know, music, I caught some of Absolutely Free and Hayden’s sets, and while both acts sounded technically really solid, they just lacked a little of the spark needed to really come alive in the festival setting.

However, sometimes the bands that get relegated to early timeslots surprise you the most. This definitely happened on Sunday, with Lee Fields & the Expressions serving up a delightful funky dance party. Fields, in his decked-out red jacket, offered a welcome helping of old-school soul. He was full of energy and even though the band was a bit of an off-beat choice for Field Trip, the crowd seemed to be loving it.

Speaking of charismatic frontmen, Father John Misty was every bit as weird and wonderful as you’d expect. It’s difficult to engage a large, sprawling festival audience – especially as a solo artist – but Father John Misty (a.k.a. Josh Tillman) had the crowd hooked from the first bombastic strains of his set. Tillman’s dynamic set involved delving into the audience, receiving an assortment of gifts from fans, dramatically tossing his acoustic guitar to a waiting stagehand, and more hip shimmies than you could count. His set wisely favoured his more bombastic material, ending with a raucous, incendiary take on “The Ideal Husband”. From there, Tillman waved and promptly exited the stage without another word. The audience, meanwhile, was left still digesting everything they’d just seen.

“I pity the fucking fool who has to follow Father John Misty,” opined a cheeky Dan Mangan half an hour later, as he began his own set on the main stage. But while it’s true that Mangan may not have quite the same flair for theatricality, he’s certainly an engaging performer in his own right. As a singer, he can belt out a note so hard that you feel it in your gut, and on older tracks like “Rows of Houses” and “Sold”, he hit some amazing vocal peaks. His newer material from this year’s Club Meds, however, felt a little denser and sat less comfortably in Mangan’s vocal range. This is purely a matter of opinion, but even on the studio tracks, I feel like the material on the plodding Club Meds often actively works against Mangan’s urgent, spiky strengths as a performer. Luckily, his Field Trip set heavily featured his older material, which got a noticeably larger reaction from the crowd.

I couldn’t stick around on Sunday night, but by all accounts, My Morning Jacket offered up a rollicking set, as you’d expect, to close out the festival.